History behind the USMC/FMF Corpsmen Memorial 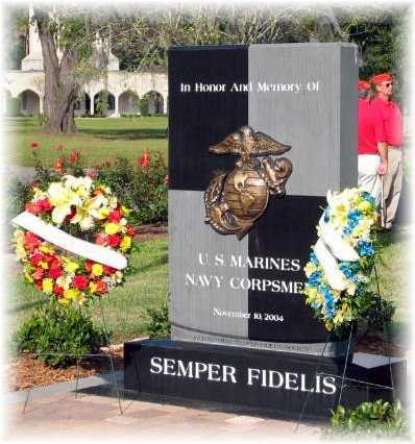 When the Marines associated with the Jacksonville Semper Fidelis Society wanted to establish a tribute to Marines from the community, it was understood that the special breed of sailor, the Corpsman, would equally share this tribute.  Marines without Navy Corpsmen are like kites without strings.  It has been the Navy Corpsmen who has kept Marines together in more ways than one.  They are beacons of strength and pillars of compassion, unselfish and courageous.  Corpsmen are and have always been held in the highest esteem amongst all Marines and we did not want this Marine emblem or the title Marine on this monument to be displayed without a reference to our brothers in blue.

The Memorial at the Evergreen Cemetery is set in a unique setting and location.  It dominates the front entrance of one of the Jacksonville’s historical treasures.  Evergreen is the burial site of many of Jacksonville’s and Florida’s key figures and the resting place of military members of conflicts from our Civil War to the present.  The Memorial stands guard over the spirits of all those that served and believed in what makes this country great; it looks out into the community as a reminder of what HONOR COURAGE, COMMITMENT and SACRIFICE are to those who served in and with the Marines.  It is the only monument in Jacksonville, a predominately Navy community, which honors both Marines and Navy Corpsmen.  It stands as a beacon for all and especially those that wore the uniform and have forgotten what the “brotherhood” is all about…A Marine brotherhood that could not be complete without the Navy Corpsman.

The Memorial was dedicated on November 10, 2004 after 2 years in planning.  The unique design was done with the help of architect Tat Chan and local artist/sculpture James Lynch under the advisement of former Marines and all Past Presidents of the Society.  The monument was crafted by Southern Monument and placed at the entrance of Evergreen Cemetery in a setting of historical trees, donated by friends of the Society, which have historical significance to Marine Corps history.  The overall project was managed by Matthew Marvin as his Eagle Scout Project and helped bring about a bond of mentorship between the Jacksonville Semper Fidelis Society and the Boy Scouts here in Jacksonville.  Dr. Herb Pearce dedicated the Memorial; He was a Navy Corpsman in WWII and an Eagle Scout.  The Memorial funds came from the Semper Fidelis Society, individual donations within the Semper Fi Society whose membership consists of Marine Veterans from WWII, Korea, Viet Nam, Beirut and the Gulf Wars, our Marine brothers and members of the Marine Corps Leagues from surrounding counties of Clay, Nassau as well as our own Duval County, North East Florida Veterans Council comprised of Veteran representatives from all the services and the members of Evergreen Cemetery Foundation.  Sadly, the local chapters of the Navy League and the Marine Corps Reserve Officers Association, which have large memberships comprising many significant members of the business and local communities, were asked for support, but both declined despite strong appeals from fellow Marines and Sailors.

The Memorial has and will continue to be rededicated every November 10th with local Marines and sister service organizations participating.  This past year’s rededication involved the family of a local Navy Corps man killed in Iraq on November 10th 2005.

Day or night, this Memorial stands guard at the gate of this historical cemetery that is the home of Veterans from every generation.  It looks out into the community and shines as beacon to all those Marines and Veterans that have lost their way and as a reminder to the community that there are some who still believe in HONOR, COURAGE and COMMITMENT.